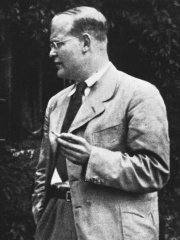 Dietrich Bonhoeffer (German: [ˈdiːtʁɪç ˈbɔn.høː.fɐ] (listen); 4 February 1906 – 9 April 1945) was a German Lutheran pastor, theologian, anti-Nazi dissident, and key founding member of the Confessing Church. His writings on Christianity's role in the secular world have become widely influential, and his book The Cost of Discipleship is described as a modern classic.Apart from his theological writings, Bonhoeffer was known for his staunch resistance to the Nazi dictatorship, including vocal opposition to Hitler's euthanasia program and genocidal persecution of the Jews. He was arrested in April 1943 by the Gestapo and imprisoned at Tegel prison for one and a half years. Read more on Wikipedia

Dietrich Bonhoeffer was a German theologian and pastor who is most famous for being a part of the resistance movement against Adolf Hitler.

Among religious figures, Dietrich Bonhoeffer ranks 382 out of 2,272. Before him are Ali al-Ridha, Clement of Ohrid, Pope Marcellus I, John Climacus, Maximus the Confessor, and Pope John IX. After him are Saint Apollonia, Theodore of Amasea, Pope Sergius IV, Abd Allah ibn al-Zubayr, Pachomius the Great, and Talhah.