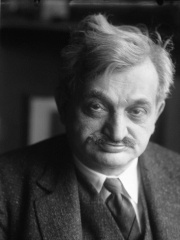 Emanuel Lasker (December 24, 1868 – January 11, 1941) was a German chess player, mathematician, and philosopher who was World Chess Champion for 27 years, from 1894 to 1921, the longest reign of any officially recognised World Chess Champion in history. In his prime, Lasker was one of the most dominant champions, and he is still generally regarded as one of the strongest players in history. His contemporaries used to say that Lasker used a "psychological" approach to the game, and even that he sometimes deliberately played inferior moves to confuse opponents. Read more on Wikipedia

Since 2007, the English Wikipedia page of Emanuel Lasker has received more than 559,834 page views. His biography is available in 62 different languages on Wikipedia making him the 6th most popular chess player.

Among CHESS PLAYERS In Poland