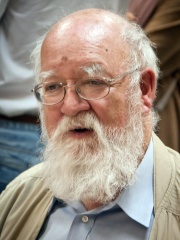 Daniel Clement Dennett III (born March 28, 1942) is an American philosopher, writer, and cognitive scientist whose research centers on the philosophy of mind, philosophy of science, and philosophy of biology, particularly as those fields relate to evolutionary biology and cognitive science.As of 2017, he is the co-director of the Center for Cognitive Studies and the Austin B. Fletcher Professor of Philosophy at Tufts University. Read more on Wikipedia

Daniel Dennett is most famous for his theory of the "intentional stance," which is the idea that we can understand the beliefs and desires of an entity by imagining that it is a person with intentions.

Among philosophers, Daniel Dennett ranks 352 out of 1,081. Before him are Yi I, E. H. Carr, Wang Yangming, Hermann Cohen, Pietro Pomponazzi, and Richard Rorty. After him are Judith Butler, J. L. Austin, Pompeia Plotina, Wilhelm Windelband, Euclid of Megara, and René Girard.