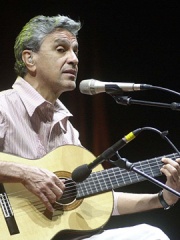 Caetano Emanuel Viana Teles Veloso (Portuguese pronunciation: [kaeˈtɐ̃nu emɐnuˈɛw viˈɐ̃nɐ ˈtɛliz veˈlozu]; born 7 August 1942) is a Brazilian composer, singer, guitarist, writer, and political activist. Veloso first became known for his participation in the Brazilian musical movement Tropicalismo, which encompassed theatre, poetry and music in the 1960s, at the beginning of the Brazilian military dictatorship that took power in 1964. He has remained a constant creative influence and best-selling performing artist and composer ever since. Read more on Wikipedia

Cátano Veloso is a Brazilian singer-songwriter who was born in Recife, Brazil. He is most famous for his song "Tropicalia."

Among MUSICIANS In Brazil