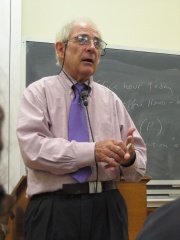 John Rogers Searle (; born July 31, 1932) is an American philosopher widely noted for contributions to the philosophy of language, philosophy of mind, and social philosophy. He began teaching at UC Berkeley in 1959, and was Willis S. and Marion Slusser Professor Emeritus of the Philosophy of Mind and Language and Professor of the Graduate School at the University of California, Berkeley until 2019. As an undergraduate at the University of Wisconsin–Madison, Searle was secretary of "Students against Joseph McCarthy". Read more on Wikipedia

John Searle is most famous for his Chinese Room argument.

Among philosophers, John Searle ranks 300 out of 1,081. Before him are Sri Aurobindo, Hipparchia of Maroneia, Jerome of Prague, Rudolf Otto, Fakhr al-Din al-Razi, and Aristoxenus. After him are Alfred Tarski, Cleanthes, Johann Reuchlin, Miskawayh, Abraham ibn Ezra, and Anne Sullivan.