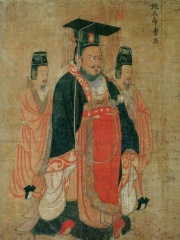 Cao Pi (pronunciation ) (c.late 187 – 29 June 226), courtesy name Zihuan, was the first emperor of the state of Cao Wei in the Three Kingdoms period of China. He was the second son of Cao Cao, a warlord who lived in the late Eastern Han dynasty, but the eldest son among all the children born to Cao Cao by his concubine (later wife), Lady Bian. According to some historical records, he was often in the presence of court officials in order to gain their support. Read more on Wikipedia

Cao Pi is most famous for being the first emperor of the Cao-Wei dynasty.

Among politicians, Cao Pi ranks 842 out of 15,577. Before him are Charles XI of Sweden, Charles XIII of Sweden, Olaf II of Norway, Wilhelm Pieck, Henry III, Holy Roman Emperor, and Nur ad-Din. After him are Cleopatra I Syra, Lech Kaczyński, Ptolemy XIII Theos Philopator, Louis I of Spain, William Howard Taft, and Frederick VI of Denmark.