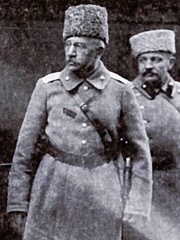 Pyotr Nikolayevich Krasnov (Russian: Пётр Николаевич Краснов; 22 September (old style: 10 September) 1869 – 17 January 1947), sometimes referred to in English as Peter Krasnov, was a Don Cossack historian and officer, promoted to Lieutenant General of the Russian army when the revolution broke out in 1917, one of the leaders of the counter-revolutionary White movement afterwards and a Nazi collaborator who mobilized Cossack forces to fight against the Soviet Union during World War II. Read more on Wikipedia

Among politicians, Pyotr Krasnov ranks 4,928 out of 15,710. Before him are Numa Denis Fustel de Coulanges, Sigvard Bernadotte, Langdarma, Martin Schulz, Otto, Duke of Austria, and Emperor Bidatsu. After him are Psusennes II, Nicomedes I of Bithynia, Pavel Axelrod, Kurmanbek Bakiyev, Abraham Kuyper, and Mamoru Shigemitsu.