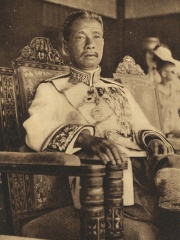 Sisowath Monivong (Khmer: ស៊ីសុវត្ថិ មុនីវង្ស, Sisŏvăt Mŭnivóng [siːsoʋat muniːʋuŋ]; 27 December 1875 – 24 April 1941) was the King of Cambodia from 9 August 1927 until his death in 1941. During his reign, Cambodia was a French protectorate. Monivong was the grandson of the poet-king Ang Duong, grandfather of Norodom Sihanouk and the great-grandfather of the current king, Norodom Sihamoni. Read more on Wikipedia

Sisowath Monivong was the king of Cambodia from 1941 to 1955. He was a great leader who pushed for a more liberal and democratic government. He was overthrown in a coup d'état by his prime minister, Lon Nol, who was backed by the U.S.

Among politicians, Sisowath Monivong ranks 4,267 out of 15,710. Before him are Pontiac, Amadeus VI, Count of Savoy, Jindeok of Silla, Zhu Youlang, Takelot II, and Andocides. After him are Bolesław II the Generous, Bogd Khan, Yang You, Terauchi Masatake, Tokugawa Yoshimune, and Andrej Hlinka.