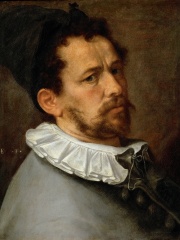 Bartholomeus Spranger or Bartholomaeus Spranger (21 March 1546 in Antwerp – 1611 in Prague) was a Flemish painter, draughtsman, sculptor, and designer of prints. Working in Prague as a court artist for the Holy Roman emperor Rudolf II, he responded to his patron's aesthetic preferences by developing a version of the extreme style, full of conceits, which has become known as Northern Mannerism. This style stressed sensuality, which was expressed in smoothly modeled, elongated figures arranged in elegant poses, often including a nude woman seen from behind. Read more on Wikipedia

Bartholomeus Spranger is most famous for his paintings of the life of Jesus Christ.

Among people born in 1546, Bartholomeus Spranger ranks 6. Before him are Murad III, Tycho Brahe, Veronica Franco, Heo Jun, and Joachim Frederick, Elector of Brandenburg. After him are Takeda Katsuyori, Dorothea of Denmark, Duchess of Brunswick-Lüneburg, Charlotte of Bourbon, Johann Fischart, and Thomas Digges. Among people deceased in 1611, Bartholomeus Spranger ranks 5. Before him are Charles IX of Sweden, Margaret of Austria, Queen of Spain, Henry Hudson, and Tomás Luis de Victoria. After him are Eleanor de' Medici, Charles, Duke of Mayenne, Katō Kiyomasa, Nicolas Henri, Duke of Orléans, Sanada Masayuki, Antonio Possevino, and Jan Huyghen van Linschoten.

Among PAINTERS In Belgium