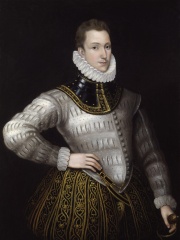 Sir Philip Sidney (30 November 1554 – 17 October 1586) was an English poet, courtier, scholar and soldier who is remembered as one of the most prominent figures of the Elizabethan age. Read more on Wikipedia

Among writers, Philip Sidney ranks 1,677 out of 5,794. Before him are Adam Oehlenschläger, Allen Carr, José de Acosta, Polyaenus, Dick Bruna, and Lilya Brik. After him are Michel Zevaco, Ivy Lee, Annie Ernaux, Lu You, Nicander, and Hellanicus of Lesbos.

Among people born in 1554, Philip Sidney ranks 7. Before him are Pope Gregory XV, Elisabeth of Austria, Queen of France, Sebastian of Portugal, Walter Raleigh, Charles, Duke of Mayenne, and Philip William, Prince of Orange. After him are Bálint Balassi, Ernest of Bavaria, Louis III, Duke of Württemberg, Richard Hooker, and John Lyly. Among people deceased in 1586, Philip Sidney ranks 9. Before him are Lucas Cranach the Younger, Ottavio Farnese, Duke of Parma, Augustus, Elector of Saxony, Antoine Perrenot de Granvelle, Adolf, Duke of Holstein-Gottorp, and Primož Trubar. After him are Birbal, Luis de Morales, Ignazio Danti, Joachim Ernest, Prince of Anhalt, and Elizabeth of Denmark, Duchess of Mecklenburg.