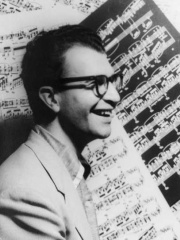 David Warren Brubeck (; December 6, 1920 – December 5, 2012) was an American jazz pianist and composer. Often regarded as a foremost exponent of cool jazz, Brubeck's work is characterized by unusual time signatures and superimposing contrasting rhythms, meters, and tonalities. Born in Concord, California, Brubeck was drafted into the US Army, but was spared from combat service when a Red Cross show he had played at became a hit. Read more on Wikipedia

Dave Brubeck is most famous for being a jazz pianist and composer. He was born in Concord, California in 1920 and studied music at the University of the Pacific. He formed the Dave Brubeck Quartet in 1951 with Paul Desmond on saxophone, Eugene Wright on bass, and Joe Morello on drums. They were one of the most popular jazz groups in the 1950s and 1960s.