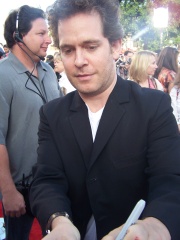 Thomas Anthony Hollander (; born 25 August 1967) is an English actor. He began his career in theatre, winning the Ian Charleson Award in 1992 for his performance as Witwoud in The Way of the World at the Lyric Hammersmith Theatre. He is known for his role in About Time, and in films such as Pirates of the Caribbean and In the Loop and drama films such as Enigma, Pride & Prejudice, Gosford Park, and Hanna, additionally portraying George V in The Lost Prince and The King's Man. Read more on Wikipedia

Since 2007, the English Wikipedia page of Tom Hollander has received more than 4,981,286 page views. His biography is available in 33 different languages on Wikipedia making him the 2,527th most popular actor.

Among actors, Tom Hollander ranks 2,493 out of 8,832. Before him are Robin Shou, Raimu, John Dall, Thomas Jane, Cheng Pei-pei, and Miriam Margolyes. After him are Derek de Lint, Will Patton, Jean Hagen, Francesca Annis, Jesse Eisenberg, and Freddie Highmore.