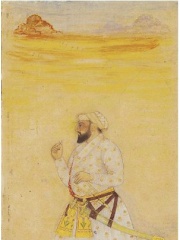 Guru Tegh Bahadur (Punjabi: ਗੁਰੂ ਤੇਗ਼ ਬਹਾਦਰ (Gurmukhi); Punjabi pronunciation: [gʊɾuː t̯eːɣ bəɦaːd̯ʊɾᵊ]; 1 April 1621 – 11 November 1675) was the ninth of ten Gurus who founded the Sikh religion and the leader of Sikhs from 1665 until his beheading in 1675. He was born in Amritsar, Punjab, India in 1621 and was the youngest son of Guru Hargobind, the sixth Sikh guru. Considered a principled and fearless warrior, he was a learned spiritual scholar and a poet whose 115 hymns are included in Sri Guru Granth Sahib, the main text of Sikhism. Read more on Wikipedia

Among politicians, Guru Tegh Bahadur ranks 6,610 out of 15,710. Before him are Masaniello, Salome I, Frederick IV, Duke of Swabia, Henry VII, Duke of Bavaria, Costas Simitis, and Frederick William, Duke of Brunswick-Wolfenbüttel. After him are Guttorm of Norway, George II, Landgrave of Hesse-Darmstadt, Jacob Stainer, Perctarit, William I, Count of Hainaut, and Luis de Requesens y Zúñiga.