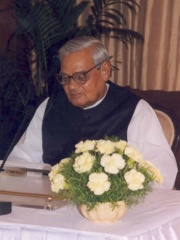 Atal Bihari Vajpayee (Hindustani pronunciation: [əʈəl bɪɦaːɾiː ʋaːdʒpai]; 25 December 1924 – 16 August 2018) was an Indian statesman who served three terms as the prime minister of India, first for a term of 13 days in 1996, then for a period of 13 months from 1998 to 1999, followed by a full term from 1999 to 2004. Vajpayee was one of the co-founders and a senior leader of the Bharatiya Janata Party (BJP). He was a member of the Rashtriya Swayamsevak Sangh, a Hindu nationalist volunteer organisation. Read more on Wikipedia

Atal Bihari Vajpayee was a prime minister of India for six years. He is most famous for his leadership in the Pokhran nuclear test in 1998, which was the first nuclear test conducted by a country outside the five permanent members of the United Nations Security Council.

Among politicians, Atal Bihari Vajpayee ranks 3,944 out of 15,710. Before him are Andrej Babiš, Caroline of Brunswick, Aulus Hirtius, Ahuitzotl, Rama II of Siam, and Emperor Kinmei. After him are Menahem, Infanta Luisa Fernanda, Duchess of Montpensier, Otto Rasch, Plutarco Elías Calles, Plectrude, and John III of Navarre.