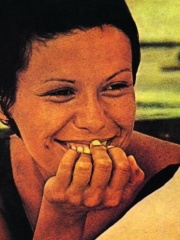 Elis Regina Carvalho Costa (March 17, 1945 – January 19, 1982), known professionally as Elis Regina (Brazilian Portuguese: [eˈlis ʁeˈʒinɐ]), was a Brazilian singer of popular and jazz music, she is also the mother of the singers Maria Rita and Pedro Mariano.She became nationally renowned in 1965 after singing "Arrastão" (composed by Edu Lobo and Vinícius de Moraes) in the first edition of TV Excelsior festival song contest and soon joined O Fino da Bossa, a television program on TV Record. She was noted for her vocalization as well as for her interpretation and performances in shows. Her recordings include "Como Nossos Pais" (Belchior), "Upa Neguinho" (E. Read more on Wikipedia

Among singers, Elis Regina ranks 301 out of 3,541. Before her are The Singing Nun, Glenn Hughes, Galina Vishnevskaya, Morten Harket, Victoria Beckham, and Heino. After her are Carl Perkins, Edita Gruberová, Andy Williams, David Byron, Boy George, and Ornella Vanoni.