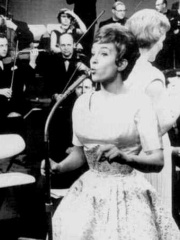 Siw Gunnel Margareta Malmkvist (born 31 December 1936) is a Swedish schlager singer and actress popular in Scandinavia and West Germany. She had a number one hit in West Germany in 1964 with "Liebeskummer lohnt sich nicht" ("Lovesickness Is Not Worthwhile"), and on 18 July 1964 she became the first Swede to have a hit on the US Billboard Hot 100 chart, when "Sole Sole Sole", a duet with Italian singer Umberto Marcato, entered the chart, peaking at No. Read more on Wikipedia

Among singers, Siw Malmkvist ranks 457 out of 3,528. Before her are Nellie Melba, Coolio, Shania Twain, Leila Mourad, Miguel Bosé, and Bobby Darin. After her are Juan Gabriel, Salomé, RM, Ice Cube, Adelina Patti, and Jorge Negrete.