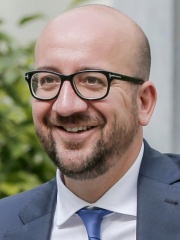 Charles Michel (French pronunciation: ​[ʃaʁl miʃɛl]; born 21 December 1975) is a Belgian politician serving as President of the European Council since 2019. He previously served as Prime Minister of Belgium between 2014 and 2019. Michel became Minister of Development Cooperation in 2007, and remained in this position until elected the leader of the Francophone liberal Reformist Movement (MR) in February 2011. Read more on Wikipedia

Since 2007, the English Wikipedia page of Charles Michel has received more than 745,698 page views. His biography is available in 55 different languages on Wikipedia making him the 6,502nd most popular politician.

Among politicians, Charles Michel ranks 6,463 out of 14,801. Before him are Julius Dorpmüller, Infanta María de la Paz of Spain, Pauline Therese of Württemberg, James Michel, Marie of Saxe-Altenburg, and Princess Elisabeth of Savoy. After him are Maria Miloslavskaya, Charlie Whiting, Marie-Claire Alain, Georgi Parvanov, Soběslav I, Duke of Bohemia, and Andrés Rodríguez.