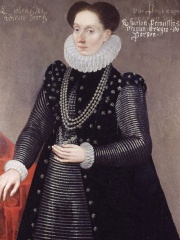 Charlotte of Bourbon (1546/1547 – 5 May 1582) was a Princess consort of Orange as the third spouse of William the Silent, Prince of Orange, the main leader of the Dutch revolt against the Spanish. Read more on Wikipedia

Page views of Charlotte of Bourbons by language

Among companions, Charlotte of Bourbon ranks 461 out of 687. Before her are Claudia Antonia, Princess Christina of the Netherlands, Catherine Stenbock, Tanaquil, Richenza of Northeim, and Eleanor of Portugal, Queen of Aragon. After her are Abbad ibn Bishr, Sancha of Castile, Queen of Aragon, Benedicta Henrietta of the Palatinate, Marie of Luxembourg, Countess of Vendôme, Neferneferuaten Tasherit, and Alia Al-Hussein.