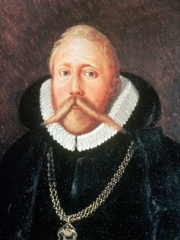 Tycho Brahe ( TY-koh BRAH(-hee, -⁠(h)ə); born Tyge Ottesen Brahe; 14 December 1546 – 24 October 1601) was a Danish astronomer, known for his accurate and comprehensive astronomical observations. Born in Scania, which became part of Sweden in the next century, Tycho was well known in his lifetime as an astronomer, astrologer, and alchemist. He has been described as "the first competent mind in modern astronomy to feel ardently the passion for exact empirical facts". Read more on Wikipedia

Tycho Brahe was a Danish astronomer who is most famous for his accurate measurements of the positions of the planets in the sky.

Among astronomers, Tycho Brahe ranks 6 out of 531. Before him are Galileo Galilei, Nicolaus Copernicus, Johannes Kepler, Ptolemy, and Giordano Bruno. After him are Anders Celsius, William Herschel, Aristarchus of Samos, Edwin Hubble, Ulugh Beg, and Hipparchus.

Among ASTRONOMERS In Sweden