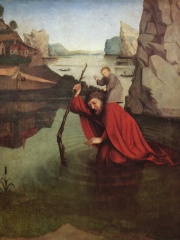 Konrad Witz (1400/1410 probably in Rottweil, Germany – winter 1445/spring 1446 in Basel, in current day Switzerland) was a German painter, active mainly in Basel. His 1444 panel The Miraculous Draft of Fishes (a portion of a lost altarpiece) has been credited as the earliest extant faithful portrayal of a landscape in European art history, being based on observation of real topographical features.Witz is most famous for painting three altarpieces, all of which survive only partially. The earliest is the Heilspiegel Altarpiece of about 1435, which today is mostly in the Kunstmuseum, Basel, and with isolated panels in other collections. Read more on Wikipedia

Konrad Witz is most famous for being the first person to accurately measure the height of a mountain.

Among people born in 1400, Konrad Witz ranks 5. Before him are Fra Angelico, Gilles Binchois, Bartolomeo Colleoni, and Gennadius Scholarius. After him are Vladislav II of Wallachia, Owen Tudor, Filarete, Ausiàs March, Ruy González de Clavijo, Alexander I of Moldavia, and Andronikos V Palaiologos. Among people deceased in 1446, Konrad Witz ranks 2. Before him is Filippo Brunelleschi. After him are Vittorino da Feltre, Louis, Count of Vendôme, and Nuno Tristão.