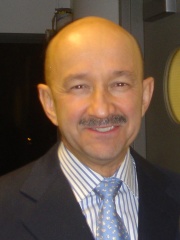 Carlos Salinas de Gortari CYC DMN (Spanish pronunciation: [ˈkaɾlos saˈlinaz ðe ɣoɾˈtaɾi]; born 3 April 1948) is a Mexican economist and politician affiliated with the Institutional Revolutionary Party (PRI) who served as President of Mexico from 1988 to 1994. He is widely regarded as the most influential and controversial politician in Mexico since the 1990s. Earlier in his career he worked in the Budget Secretariat, eventually becoming Secretary. Read more on Wikipedia

Among politicians, Carlos Salinas de Gortari ranks 3,283 out of 15,710. Before him are Herennius Etruscus, Hyeonjong of Goryeo, Thessalonike of Macedon, Abu Musa al-Ash'ari, Grand Duchess Xenia Alexandrovna of Russia, and Akhmad Kadyrov. After him are Prince Augustus William of Prussia, Yumjaagiin Tsedenbal, Charles Theodore, Elector of Bavaria, Wenzel Anton, Prince of Kaunitz-Rietberg, Al-Muntasir, and Shahrbaraz.