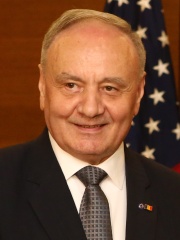 Nicolae Timofti (Romanian pronunciation: [nikoˈla.e tiˈmofti]; born 22 December 1948 in Ciutulești) is a Moldovan jurist and politician who was President of Moldova from 23 March 2012 until 23 December 2016. Read more on Wikipedia

Since 2007, the English Wikipedia page of Nicolae Timofti has received more than 89,484 page views. His biography is available in 53 different languages on Wikipedia making him the 4,827th most popular politician.

Among politicians, Nicolae Timofti ranks 4,798 out of 14,801. Before him are Acamapichtli, Rudolf Kirchschläger, Archduchess Marie Caroline of Austria, Ottokar Czernin, Beatrice of Portugal, Duchess of Savoy, and Hussein-Ali Montazeri. After him are Shapour Bakhtiar, Kakuei Tanaka, Quintus Lutatius Catulus, Jeremy Corbyn, Richard, 6th Prince of Sayn-Wittgenstein-Berleburg, and Zakir Husain.