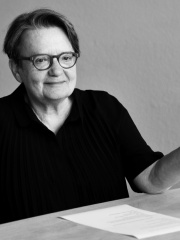 Agnieszka Holland (born 28 November 1948) is a Polish film and television director and screenwriter, best known for her political contributions to Polish cinema. She began her career as assistant to directors Krzysztof Zanussi and Andrzej Wajda, and emigrated to France shortly before the 1981 imposition of the martial law in Poland. Holland is best known for her films Europa Europa (1990), for which she received an Academy Award for Best Adapted Screenplay nomination, as well as Angry Harvest and the Holocaust drama In Darkness, both of which were nominated for the Academy Award for Best Foreign Language Film. Read more on Wikipedia

Agnieszka Holland is a Polish film director and screenwriter. She has directed many films, but is most famous for her work on Europa Europa (1990), In Darkness (2011), and Spoor (2013).

Among FILM DIRECTORS In Poland