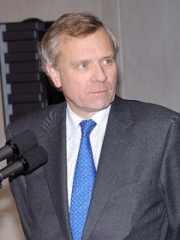 Jakob Gijsbert "Jaap" de Hoop Scheffer [ˈjaːb də ˈɦoːp ˈsxɛfər] (listen); born 3 April 1948) is a Dutch politician and diplomat of the Christian Democratic Appeal (CDA) party and jurist who served as Secretary General of NATO from January 2004 to August 2009.De Hoop Scheffer studied Law at the Leiden University obtaining a Master of Laws degree and worked as a civil servant and diplomat for the Ministry of Foreign Affairs and the Diplomatic service from October 1976 until June 1986. After the election of 1986 De Hoop Scheffer was elected as a Member of the House of Representatives on 3 June 1986 and served a frontbencher and spokesperson for Foreign and European Affairs. After Party Leader and Parliamentary leader Enneüs Heerma stepped down De Hoop Scheffer was selected as his successor on 27 March 1997. Read more on Wikipedia

Among politicians, Jaap de Hoop Scheffer ranks 4,118 out of 15,577. Before him are Agis I, Berenice III of Egypt, Louis I, Grand Duke of Hesse, Sigismondo Pandolfo Malatesta, Rumen Radev, and Princess Augusta Wilhelmine of Hesse-Darmstadt. After him are Eric XII of Sweden, Countess Palatine Dorothea Sophie of Neuburg, Ricardo Lagos, Sisygambis, Stefan the First-Crowned, and Franz Josef Strauss.