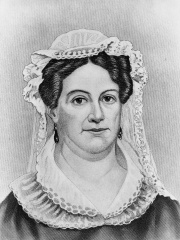 Rachel Jackson (née Donelson; June 15, 1767 – December 22, 1828) was the wife of Andrew Jackson, the 7th President of the United States. She lived with him at their home at The Hermitage, where she died just days after his election and before his inauguration in 1829—therefore she never served as First Lady, a role assumed by her niece, Emily Donelson.Rachel Jackson was married at first to Lewis Robards in Nashville. In about 1791, she eloped with Andrew Jackson, believing that Robards had secured the couple a divorce. Read more on Wikipedia

Among companions, Rachel Jackson ranks 650 out of 687. Before her are Theodora, daughter of Constantine VII, Anna Sophie of Saxe-Gotha-Altenburg, Iset Ta-Hemdjert, Princess Augusta of Saxe-Meiningen, Sophia Louise of Mecklenburg-Schwerin, and Cindy Breakspeare. After her are Sophie, Hereditary Princess of Liechtenstein, Theodora, Ermesinda of Bigorre, Princess Sofia, Duchess of Värmland, Princess Pauline of Saxe-Weimar-Eisenach, and Prokopia.