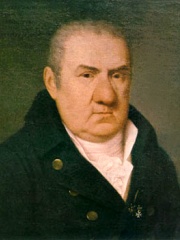 Giacomo Quarenghi (Italian pronunciation: [ˈdʒaːkomo kwaˈreŋɡi; -ˈrɛŋɡi]; Russian: Джа́комо Кваре́нги, tr. Džákomo Kvaréngi, IPA: [ˈdʐakəmə kvɐˈrʲenʲɡʲɪ]; 20 or 21 September 1744 – 2 March [O.S. 18 February] 1817) was the foremost and most prolific practitioner of neoclassical architecture in Imperial Russia, particularly in Saint Petersburg. He brought into vogue an original monumental style, of Palladian inspiration, which was a reference for many architects who worked in Russia. Read more on Wikipedia

Among architects, Giacomo Quarenghi ranks 246 out of 424. Before him are Glenn Murcutt, François de Cuvilliés, Michael Graves, Augustus Pugin, Lilly Reich, and Ernst May. After him are Charles Barry, Ralph Erskine, Günter Behnisch, Jan Gehl, Lambert Lombard, and Max Fabiani.