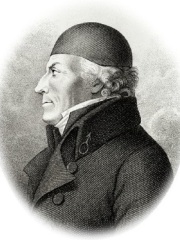 Johan Gottlieb Gahn (19 August 1745 – 8 December 1818) was a Swedish chemist and metallurgist who discovered manganese in 1774.Gahn studied in Uppsala 1762 – 1770 and became acquainted with chemists Torbern Bergman and Carl Wilhelm Scheele. 1770 he settled in Falun, where he introduced improvements in copper smelting, and participated in building up several factories, including those for vitriol, sulfur and red paint. He was the chemist for The Swedish Board of Mines Bergskollegium from 1773 – 1817. Read more on Wikipedia

Since 2007, the English Wikipedia page of Johan Gottlieb Gahn has received more than 30,517 page views. His biography is available in 29 different languages on Wikipedia making him the 217th most popular chemist.