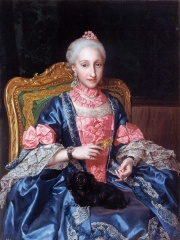 María Josefa Carmela of Spain (6 July 1744 – 8 December 1801) was a Princess of Naples and Sicily by birth. At the accession of her father to the Spanish throne as Charles III, she became an Infanta of Spain. Born and raised in Naples, she arrived in Spain with her family in October 1759, at age fifteen. Read more on Wikipedia

Page views of Infanta Maria Josefa of Spains by language

Among noblemen, Infanta Maria Josefa of Spain ranks 475 out of 843. Before her are Anna Catherine Constance Vasa, Joanna, Princess of Portugal, Princess Maria Augusta of Saxony, Prince William, Duke of Gloucester, Maria Amalia of Courland, and Emma of France. After her are Antoinette de Mérode, Prince Aloys of Liechtenstein, José, Prince of Brazil, Adolf Frederick I, Duke of Mecklenburg, Christian II, Count Palatine of Zweibrücken-Birkenfeld, and Taddea Visconti.