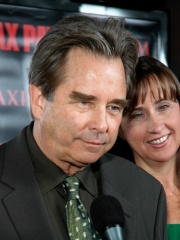 Lloyd Vernet "Beau" Bridges III (born December 9, 1941) is an American actor and director. He is a three-time Emmy, two-time Golden Globe and one-time Grammy Award winner, as well as a two-time Screen Actors Guild Award nominee. Bridges was awarded a star on the Hollywood Walk of Fame on April 7, 2003, at 7065 Hollywood Boulevard for his contributions to the television industry. Read more on Wikipedia

Since 2007, the English Wikipedia page of Beau Bridges has received more than 3,812,974 page views. His biography is available in 36 different languages on Wikipedia making him the 1,165th most popular actor.