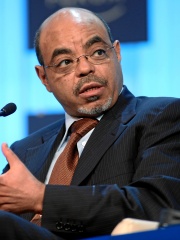 Meles Zenawi Asres (Ge'ez: መለስ ዜናዊ ኣስረስ, mäläs zenawi asräs; pronounced [ˈmɛlɛs ˈzɛnawi asrəs] listen , born Legesse Zenawi Asres; 8 May 1955 – 20 August 2012) was an Ethiopian politician who was President of Ethiopia and consecutively served as 8th Prime Minister of Ethiopia. He was the founder of the federalism of modern Ethiopia. After leading the Ethiopian People's Revolutionary Democratic Front to victory in the Ethiopian Civil War, he served as President of the Transitional Government of Ethiopia from 1991 to 1995, then as the 8th Prime Minister of Ethiopia from 1995 to his death in 2012. Read more on Wikipedia

Since 2007, the English Wikipedia page of Meles Zenawi has received more than 600,049 page views. His biography is available in 55 different languages on Wikipedia making him the 6,709th most popular politician.

Among politicians, Meles Zenawi ranks 6,667 out of 14,801. Before him are Tudor Vladimirescu, Henry I, Margrave of Austria, Jangsu of Goguryeo, Marcello Tegalliano, Princess Margaret of Prussia, and Lucia, Countess of Tripoli. After him are Carlos Antonio López, Yehuda Ashlag, Henry L. Stimson, Conrad I, Count of Auxerre, Publius Vatinius, and John A. Macdonald.