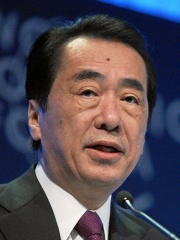 Naoto Kan (菅 直人, Kan Naoto, born 10 October 1946) is a Japanese politician who was Prime Minister of Japan and President of the Democratic Party of Japan (DPJ) from June 2010 to September 2011. Kan was the first Prime Minister since the resignation of Junichiro Koizumi in 2006 to serve for more than one year, with his predecessors Yukio Hatoyama, Tarō Asō, Yasuo Fukuda, and Shinzō Abe either resigning prematurely or losing an election. On 26 August 2011, Kan announced his resignation. Read more on Wikipedia

Naoto Kan was the Prime Minister of Japan during the 2011 Tohoku earthquake and tsunami. He was most famous for his response to the disaster and his efforts to rebuild the country.

Among politicians, Naoto Kan ranks 3,622 out of 15,710. Before him are Tancred of Hauteville, Balash, Fatma Sultan, Geunchogo of Baekje, Ashikaga Takauji, and Paul Deschanel. After him are Julia Avita Mamaea, Emperor Ping of Han, Daemusin of Goguryeo, Albert VI, Archduke of Austria, Mohamed Ghannouchi, and Margaret Chan.