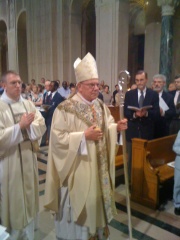 William Joseph Levada (June 15, 1936 – September 26, 2019) was an American cardinal of the Catholic Church. From May 2005 until June 2012, he served as Prefect of the Congregation for the Doctrine of the Faith under Pope Benedict XVI; he was the highest ranking American in the Roman Curia. He was previously the Archbishop of Portland in Oregon from 1986 to 1995, and then Archbishop of San Francisco from 1995 to 2005. Read more on Wikipedia

Among religious figures, William Levada ranks 1,479 out of 2,238. Before him are Robert Cornelius, Hieronymus von Colloredo, Adolfo Nicolás, Michael the Syrian, Adalbert of Hamburg, and Joachim Meisner. After him are Maxim of Bulgaria, Dawud al-Zahiri, Dimitry of Rostov, Pope Cyril VI of Alexandria, Guillaume Dubois, and Ernest Simoni.