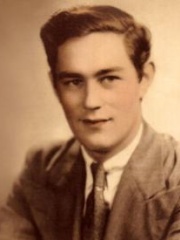 Henry Gustav Molaison (February 26, 1926 – December 2, 2008), known widely as H.M., was an American who had a bilateral medial temporal lobectomy to surgically resect the anterior two thirds of his hippocampi, parahippocampal cortices, entorhinal cortices, piriform cortices, and amygdalae in an attempt to cure his epilepsy. Although the surgery was partially successful in controlling his epilepsy, a severe side effect was that he became unable to form new memories. A childhood bicycle accident is often advanced as the likely cause of H.M's epilepsy. H.M. Read more on Wikipedia

Among religious figures, Henry Molaison ranks 1,109 out of 2,238. Before him are Nicholas Mystikos, Simon of Trent, Abu Darda, Fatimah bint Musa, Pavle, Serbian Patriarch, and Keith O'Brien. After him are Jesse Livermore, Giuseppe Siri, Nicholas of Japan, Pietro Gasparri, Nilus the Younger, and Moses the Black.