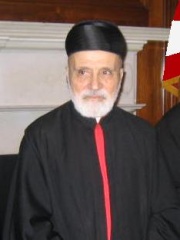 Nasrallah Boutros Sfeir (Moran Mor Naṣrallah Buṭrus Ṣufayr; Arabic: الكاردينال مار نصر الله بطرس صفير‎; Latin: Victor Petrus Sfeir; 15 May 1920 – 12 May 2019) was the patriarch of Lebanon's largest Christian body, the Maronite Church, an Eastern Catholic Church in communion with the Holy See. He was also given the honorific title of cardinal. He was elected Patriarch of Antioch for the Maronites on 27 April 1986, and his resignation was accepted on 26 February 2011. Read more on Wikipedia

Among religious figures, Nasrallah Boutros Sfeir ranks 1,166 out of 2,272. Before him are Raymond V, Count of Toulouse, Pope Anianus of Alexandria, Pope Tawadros II of Alexandria, Abu Sa'id Abu'l-Khayr, Saichō, and Menocchio. After him are Adam Rainer, Jean Daniélou, Ahijah the Shilonite, Bernardin Gantin, Anthony Mary Claret, and Tola.