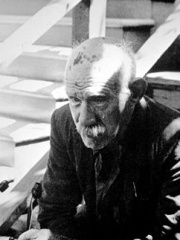 ‹See Tfd› Henry Joseph Darger Jr. (; April 12, 1892 – April 13, 1973) was an American writer, novelist and artist who worked as a hospital custodian in Chicago, Illinois. He has become famous for his posthumously discovered 15,145-page fantasy novel manuscript called The Story of the Vivian Girls, in What Is Known as the Realms of the Unreal, of the Glandeco-Angelinian War Storm, Caused by the Child Slave Rebellion, along with several hundred drawings and watercolor illustrations for the story.The visual subject matter of his work ranges from idyllic scenes in Edwardian interiors and tranquil flowered landscapes populated by children and fantastic creatures, to scenes of horrific terror and carnage depicting young children being tortured and massacred.: 106  Much of his artwork is mixed media with collage elements. Read more on Wikipedia