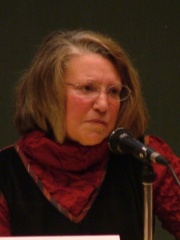 Nancy Fraser (; born May 20, 1947) is an American philosopher, critical theorist, feminist, and the Henry A. and Louise Loeb Professor of Political and Social Science and professor of philosophy at The New School in New York City. Widely known for her critique of identity politics and her philosophical work on the concept of justice, Fraser is also a staunch critic of contemporary liberal feminism and its abandonment of social justice issues. Fraser holds honorary doctoral degrees from four universities in three countries, and won the 2010 Alfred Schutz Prize in Social Philosophy from the American Philosophical Association. Read more on Wikipedia

Among philosophers, Nancy Fraser ranks 797 out of 1,081. Before her are Joseph Albo, Raymond Williams, Hayashi Razan, Ahmad al-Tayyeb, Yajnavalkya, and Rishabhanatha. After her are Marco Antonio de Dominis, Jean Guitton, Vincenzo Gioberti, Musaeus of Athens, Perry Anderson, and George of Trebizond.