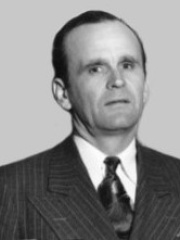 William Marrion Branham (April 6, 1909 – December 24, 1965) was an American Christian minister and faith healer who initiated the post–World War II healing revival, and claimed to be a prophet with the anointing of Elijah, who had come to prelude Christ's second coming; some of his followers have been labeled a "doomsday cult". He is credited as "a principal architect of restorationist thought" for charismatics by some Christian historians, and has been called the "leading individual in the Second Wave of Pentecostalism." He made a lasting influence on televangelism and the modern charismatic movement, and his "stage presence remains a legend unparalleled in the history of the Charismatic movement". At the time they were held, his inter-denominational meetings were the largest religious meetings ever held in some American cities. Read more on Wikipedia

Among religious figures, William M. Branham ranks 1,269 out of 2,238. Before him are George Alencherry, Macrina the Younger, Ivo of Chartres, Meher Baba, Raffaele Riario, and Antipope Adalbert. After him are Vitalis of Milan, Augustin Bea, Peter Nolasco, Guru Angad, Clemens August of Bavaria, and Zanabazar.