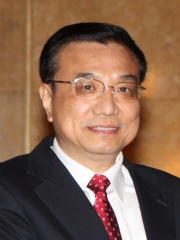 Li Keqiang (; Chinese: 李克强; Mandarin: [lì kʰɤ̂.tɕʰjǎŋ]; born 1 July 1955) is a Chinese politician who is the current premier of the State Council of the People's Republic of China since 15 March 2013. An economist by profession, Li is China's head of government as well as one of the leading figures behind China's Financial and Economic Affairs, Foreign Affairs, National Security and Deepening Reforms. He is also the second-ranked member of the Politburo Standing Committee of the Chinese Communist Party, the de facto top decision-making body of the country. Read more on Wikipedia

Li Keqiang is most famous for being the Premier of the People's Republic of China.

Among politicians, Li Keqiang ranks 1,823 out of 15,710. Before him are Edgar the Peaceful, Ferdinand I of Naples, Charles VIII of Sweden, Richard von Weizsäcker, Qa'a, and Edward the Martyr. After him are Ferdinand II of the Two Sicilies, Maria Anna of Savoy, Frederick the Fair, Wang Zhaojun, Prince Maximilian of Baden, and Karl Renner.