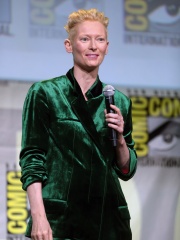 Katherine Matilda Swinton (born 5 November 1960) is a British actress and narrator, known for her roles in both independent arthouse films and blockbusters. She won the Academy Award for Best Supporting Actress for her performance in the 2007 film Michael Clayton. She also won the BAFTA Scotland Award for Best Actress for the 2003 film Young Adam, and has received three Golden Globe Award nominations.Swinton began her career in experimental films, directed by Derek Jarman, starting with Caravaggio (1986), followed by The Last of England (1988), War Requiem (1989), and The Garden (1990). Read more on Wikipedia

Tilda Swinton is an actress from Scotland. She is most famous for her roles in films such as "The Beach," "The Chronicles of Narnia: The Lion, the Witch and the Wardrobe," and "We Need to Talk About Kevin."