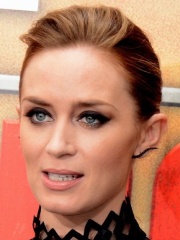 Emily Olivia Leah Blunt (born 23 February 1983) is a British actress. Her accolades include a Golden Globe Award and a Screen Actors Guild Award, in addition to nominations for two British Academy Film Awards. Educated at Hurtwood House in Dorking, Blunt made her acting debut in a 2001 stage production of The Royal Family. Read more on Wikipedia

GameSpot
Emily Blunt Says She Doesn't Have A "Burning Desire" To Play A Superhero
Actress Emily Blunt is not all that interested in playing a superhero. She said in a recent interview that she understands how superhero films "are like a religion" for some people. But for her personally, she doesn't have that same drive or enthusiasm."I rea…
Eddie Makuch
CinemaBlend
Jungle Cruise’s Emily Blunt Reveals Hilarious Nickname She Gave Dwayne Johnson
Add this to Dwayne Johnson's list of nicknames alongside The Rock.
Sarah El-Mahmoud
CinemaBlend
Sorry, Fantastic Four Fans, Emily Blunt Further Explains Why She’s Not Interested In Superhero Movies
It's really doesn't sound like Emily Blunt is interested.
Sean O'Connell
allears.net
PHOTOS: Dwayne Johnson and Emily Blunt are in Disneyland Today
Two SUPER famous people are at Disneyland today! Check it out here! The post PHOTOS: Dwayne Johnson and Emily Blunt are in Disneyland Today appeared first on AllEars.Net.
Zac Panza