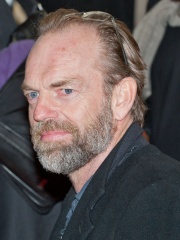 Hugo Wallace Weaving (born 4 April 1960) is a British actor resident in Australia. He is best known for playing Agent Smith in The Matrix trilogy (1999–2003), Elrond in The Lord of the Rings (2001–2003) and The Hobbit (2012–2014) film trilogies, V in V for Vendetta (2005), and Red Skull in the movie Captain America: The First Avenger (2011). Weaving's first television role was in the 1984 Australian television series Bodyline, where he portrayed English cricket captain Douglas Jardine. Read more on Wikipedia

Since 2007, the English Wikipedia page of Hugo Weaving has received more than 6,127,556 page views. His biography is available in 53 different languages on Wikipedia making him the 523rd most popular actor.

Among ACTORS In Nigeria

Among actors born in Nigeria, Hugo Weaving ranks 1. After him are Genevieve Nnaji (1979).