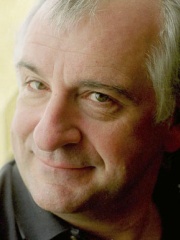 Douglas Noel Adams (11 March 1952 – 11 May 2001) was an English author, screenwriter, essayist, humorist, satirist and dramatist. Adams was author of The Hitchhiker's Guide to the Galaxy, which originated in 1978 as a BBC radio comedy before developing into a "trilogy" of five books that sold more than 15 million copies in his lifetime and generated a television series, several stage plays, comics, a video game, and in 2005 a feature film. Adams's contribution to UK radio is commemorated in The Radio Academy's Hall of Fame.Adams also wrote Dirk Gently's Holistic Detective Agency (1987) and The Long Dark Tea-Time of the Soul (1988), and co-wrote The Meaning of Liff (1983), The Deeper Meaning of Liff (1990), Last Chance to See (1990). Read more on Wikipedia

Since 2007, the English Wikipedia page of Douglas Adams has received more than 3,035,725 page views. His biography is available in 81 different languages on Wikipedia making him the 664th most popular writer.