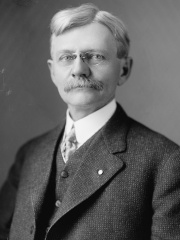 Thomas Riley Marshall (March 14, 1854 – June 1, 1925) was an American politician who served as the 28th vice president of the United States from 1913 to 1921 under President Woodrow Wilson. A prominent lawyer in Indiana, he became an active and well known member of the Democratic Party by stumping across the state for other candidates and organizing party rallies that later helped him win election as the 27th governor of Indiana. Read more on Wikipedia

Since 2007, the English Wikipedia page of Thomas R. Marshall has received more than 466,987 page views. His biography is available in 46 different languages on Wikipedia making him the 6,494th most popular politician.

Among politicians, Thomas R. Marshall ranks 6,457 out of 14,801. Before him are Fujiwara no Michinaga, Ashur-dan II, Giorgi Saakadze, Zhong Yao, Spytihněv II, Duke of Bohemia, and Aeacides of Epirus. After him are Frederick V, Duke of Swabia, Julius Dorpmüller, Infanta María de la Paz of Spain, Pauline Therese of Württemberg, James Michel, and Marie of Saxe-Altenburg.