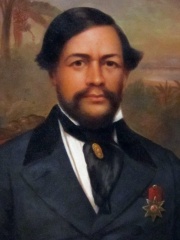 Kamehameha III (born Kauikeaouli) (March 17, 1814 – December 15, 1854) was the third king of the Kingdom of Hawaii from 1825 to 1854. His full Hawaiian name is Keaweaweʻula Kīwalaʻō Kauikeaouli Kaleiopapa and then lengthened to Keaweaweʻula Kīwalaʻō Kauikeaouli Kaleiopapa Kalani Waiakua Kalanikau Iokikilo Kīwalaʻō i ke kapu Kamehameha when he ascended the throne. Under his reign, Hawaii evolved from an absolute monarchy to a constitutional monarchy with the signing of both the 1840 Constitution, which was the first Hawaiian Language Constitution, and the 1852 Constitution. Read more on Wikipedia

Among politicians, Kamehameha III ranks 7,710 out of 15,710. Before him are Louis of Nassau, Willy Claes, Vlastimir, Baldomero Espartero, Zu Ding, and Rajaram I. After him are Rangjung Rigpe Dorje, 16th Karmapa, Frederick, Hereditary Prince of Baden-Durlach, Eustace IV, Count of Boulogne, Manuel III of Trebizond, Erik Scavenius, and Dhyan Chand.