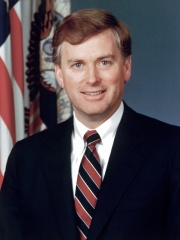 James Danforth Quayle (; born February 4, 1947) is an American lawyer and politician who served as the 44th vice president of the United States from 1989 to 1993 under President George H. W. Bush. Before that, Quayle served as a member of the U.S. House of Representatives for Indiana's 4th district from 1977 to 1981 and as a U.S. senator from Indiana from 1981 to 1989. A native of Indianapolis, Quayle spent most of his childhood in Paradise Valley, a suburb of Phoenix, Arizona. He married Marilyn Tucker in 1972 and obtained his J.D. degree from the Indiana University Robert H. Read more on Wikipedia

Among politicians, Dan Quayle ranks 7,984 out of 15,710. Before him are Ukita Hideie, Count Theodosius, Jonas Basanavičius, Rostislav I of Kiev, Lê Đức Anh, and Princess Patricia of Connaught. After him are Maria Teresa Cybo-Malaspina, Duchess of Massa, Milan Stojadinović, Festus Mogae, John Ernest IV, Duke of Saxe-Coburg-Saalfeld, Li Yu, and Hethum I, King of Armenia.