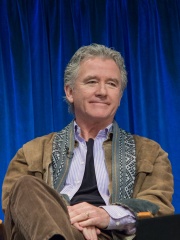 Patrick George Duffy (born March 17, 1949) is an American actor, best known for his role on the CBS primetime soap opera Dallas, where he played Bobby Ewing, the youngest son of Miss Ellie and the nicest brother of J.R. Ewing (played by Barbara Bel Geddes and Larry Hagman respectively) from 1978 to 1985 and from 1986 to 1991. Duffy returned to reprise his role as Bobby in a continuation of Dallas, which aired on TNT from 2012 to 2014. He is also well known for his role on the ABC sitcom Step by Step as Mr. Read more on Wikipedia

Since 2007, the English Wikipedia page of Patrick Duffy has received more than 2,181,215 page views. His biography is available in 26 different languages on Wikipedia making him the 1,048th most popular actor.