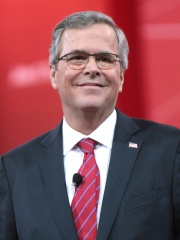 John Ellis "Jeb" Bush (born February 11, 1953) is an American politician and businessman who served as the 43rd Governor of Florida from 1999 to 2007. Bush, who grew up in Houston, is the second son of the late former President George H. W. Bush and former First Lady Barbara Bush, and a younger brother of former President George W. Bush. He graduated from Phillips Academy in Andover, Massachusetts, and attended the University of Texas at Austin, where he earned a degree in Latin American affairs. Read more on Wikipedia

Among politicians, Jeb Bush ranks 7,497 out of 15,710. Before him are Paul Martin, Rinchinbal Khan, Birsa Munda, Tudhaliya III, Archelaus of Cappadocia, and Lynne Cheney. After him are Artystone, Mahmud I of Great Seljuq, Michel Kafando, Princess Alexandra of Saxe-Coburg and Gotha, Urraca of Portugal, and Ateas.