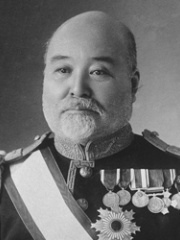 Viscount Takahashi Korekiyo (高橋 是清, 27 July 1854 – 26 February 1936) was a Japanese politician who served as a member of the House of Peers, as Prime Minister of Japan from 1921 to 1922, and as the head of the Bank of Japan and Ministry of Finance. Takahashi made many contributions to Japan's development during the early 20th century, including introducing its first patent system and securing foreign financing for the Russo-Japanese War. Following the onset of the Great Depression, he introduced controversial financial policies which included abandoning the gold standard, lowering interest rates, and using the Bank of Japan to finance deficit spending by the central government. Read more on Wikipedia

Among politicians, Takahashi Korekiyo ranks 6,041 out of 15,710. Before him are Paul Wolfowitz, Henry McMahon, Antipope Benedict X, Constance of Castile, Duchess of Lancaster, Puabi, and Rashid Ali al-Gaylani. After him are Joachim Yhombi-Opango, King Zhao of Zhou, Neferhotep I, Kusunoki Masashige, Agustín Muñoz Grandes, and Józef Beck.