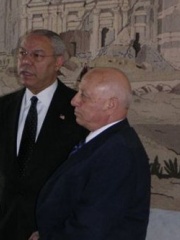 Ahmed Ali Mohammed Qurei (or Qureia; Arabic: أحمد علي محمد قريع, Aḥmad ʿAlī Muḥammad Qurayʿ), also known by his Arabic kunya Abu Alaa (أبو علاء, Abū ʿAláʾ) (born March 26, 1937) is a former Prime Minister of the Palestinian National Authority. First appointed to the position in October 2003, he tendered his resignation on January 26, 2006, following the defeat of the Fatah party in the 2006 Palestinian legislative election, and remained in office in a caretaker capacity until 19 February when he was succeeded by Ismail Haniyeh. During his tenure as prime minister, he has also had responsibility for security matters. Read more on Wikipedia

Among politicians, Ahmed Qurei ranks 8,019 out of 15,577. Before him are Andrej Plenković, Charles I of Albret, Prince Tomislav of Yugoslavia, Spytihněv I, Duke of Bohemia, Thomas R. Marshall, and Maximiliano Hernández Martínez. After him are Valentin Inzko, Porfirio Lobo Sosa, Quintus Fulvius Flaccus, Elephant, Ernest Casimir I, Count of Nassau-Dietz, and Infanta María Cristina of Spain.