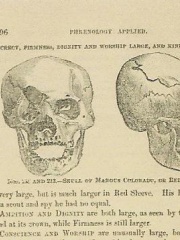 Mangas Coloradas or Mangus-Colorado (La-choy Ko-kun-noste, alias "Red Sleeve"), or Dasoda-hae ("He Just Sits There") (c. 1793 – January 18, 1863) was an Apache tribal chief and a member of the Mimbreño (Tchihende) division of the Central Apaches, whose homeland stretched west from the Rio Grande to include most of what is present-day southwestern New Mexico. He was the father-in-law of the Chiricahua (Tsokanende) chief Cochise, the Mimbreño chief Victorio and the Mescalero (Sehende) chief Kutu-hala or Kutbhalla (probably to be identified with Caballero). Read more on Wikipedia

Among politicians, Mangas Coloradas ranks 7,820 out of 15,710. Before him are Pausanias of Macedon, Wolfgang Schüssel, Ali Kafi, Nicholas I, Duke of Lorraine, Stanisław Poniatowski, and Agnes of Dampierre. After him are Behgjet Pacolli, Lucius Scribonius Libo, Wang Ming, Stefan Vojislav, George, Emperor of Trebizond, and Wilfrid Laurier.